For the 2017 pre-season, the 2017 Hyundai Santa Fe squares off against the 2016 Honda CR-V. These are two of the most recognized competitors in the crossover SUV bracket, and critics are debating which will come out on top.

If you’re thinking about buying a new SUV for your family, then this post is for you. Both the Hyundai Santa Fe and the Honda CR-V have a lot to offer, and we at Kelowna Hyundai would like to help you make an educated decision. Let’s compare the two, shall we?

The 2017 Santa Fe has just been totally redesigned. You’ll find generous headroom and legroom, as well as a pleasant ambience thanks to rich cabin materials and intuitive user controls. Its standard V6 engine is powerful, but surprisingly quiet, making it ideal for city life throughout Kelowna and beyond.

The 2016 Honda CR-V has received a new trim level and a few upgrades for the new year. It has superior headroom and legroom in the third row, but less cargo capacity than the Santa Fe. The CR-V has a more modest engine, but that doesn’t make it a slouch. Let’s talk more about the powertrains… 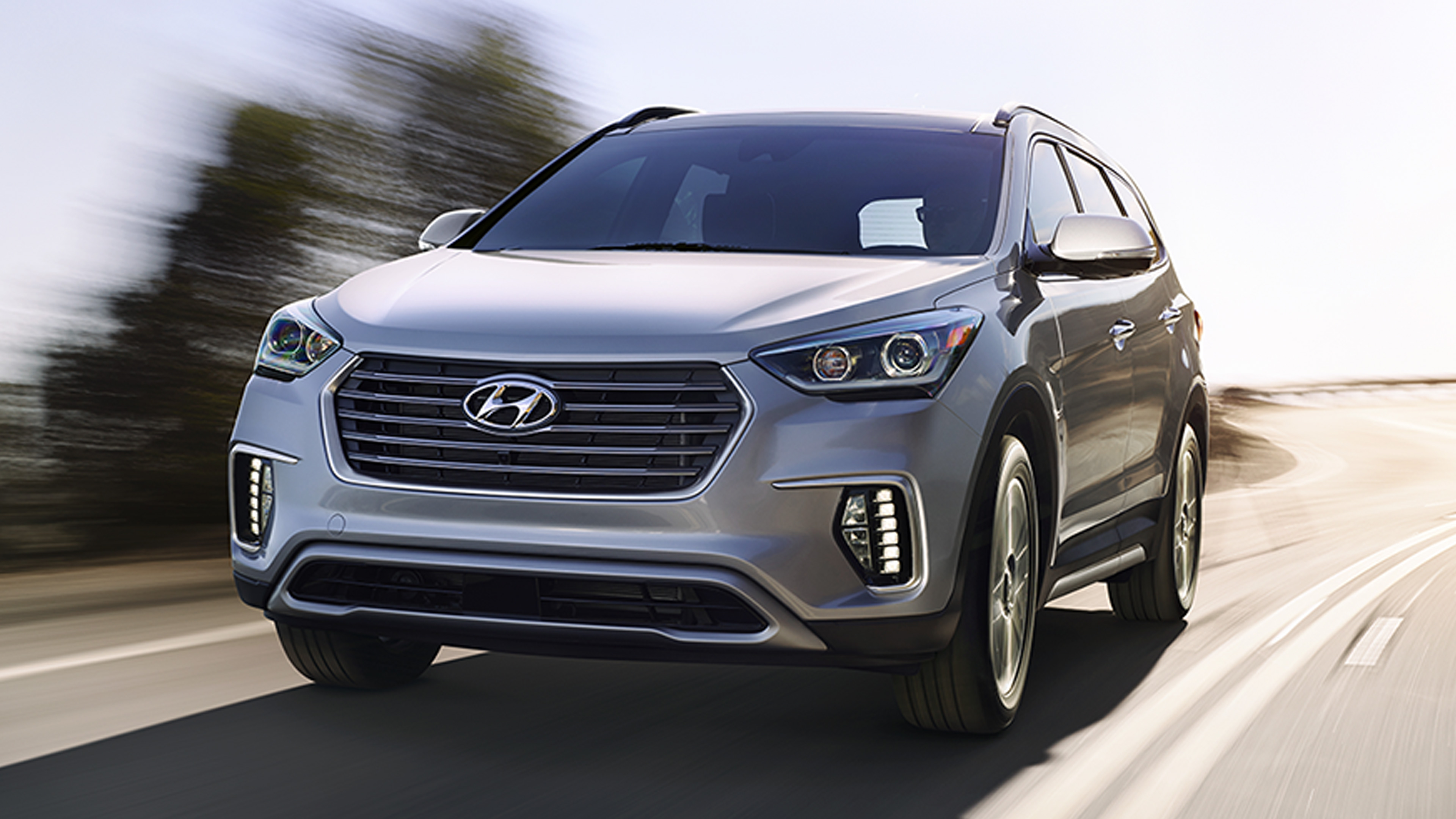 Powering the Honda CR-V is a 2.4-litre four cylinder engine producing 185 horsepower and 181 pound-feet of torque. This is similar to what you’d find in midsize sedans. All-wheel drive (AWD) is available with the CR-V, which is a great option for owners to like to drive beyond city limits and explore the beautiful British Columbia. You can expect 29 mpg combined fuel economy with front-wheel drive and 27 with all-wheel, which is above average for a crossover SUV, making the CR-V great for city driving.

Powering the Santa Fe is a 3.3-L V6 pushing out 290 hp and 252 lb.-ft. of torque, giving you more power along with the choice of AWD. The Santa Fe tows much more than the CR-V could, and you’ll be towing 5,000 pounds without breaking a sweat. The Santa Fe accelerates much quicker too. You’ll still be getting strong, crossover-class-standard fuel economy at 21 mpg combined with the FWD models and 20 mpg combined with AWD. And it’s an especially quiet ride, despite the big engine!

The factors here depend on what you see yourself doing in your new SUV–driving within the city, or driving in the city and off-road, as well as towing for, say, a road trip.

The 2017 Santa Fe is brand new to the market, so it hasn’t received safety ratings yet from the IIHS, but we expect it to receive top ratings just as the 2016 Honda CR-V has. SUVs are amongst the safest vehicles on the road, so you can expect the highest standards here from both Honda and Hyundai.

You’ll appreciate having the most advanced safety features available, including autonomous emergency braking with pedestrian detection, blind-spot detection, rear cross-traffic alert, rear parking assistance, seven standard airbags, a lane-departure warning system, electronic brake-force distribution, hill-start assist, and downhill brake control–all of these are either standard or optional with the Santa Fe, and you can expect comparable features with the CR-V. 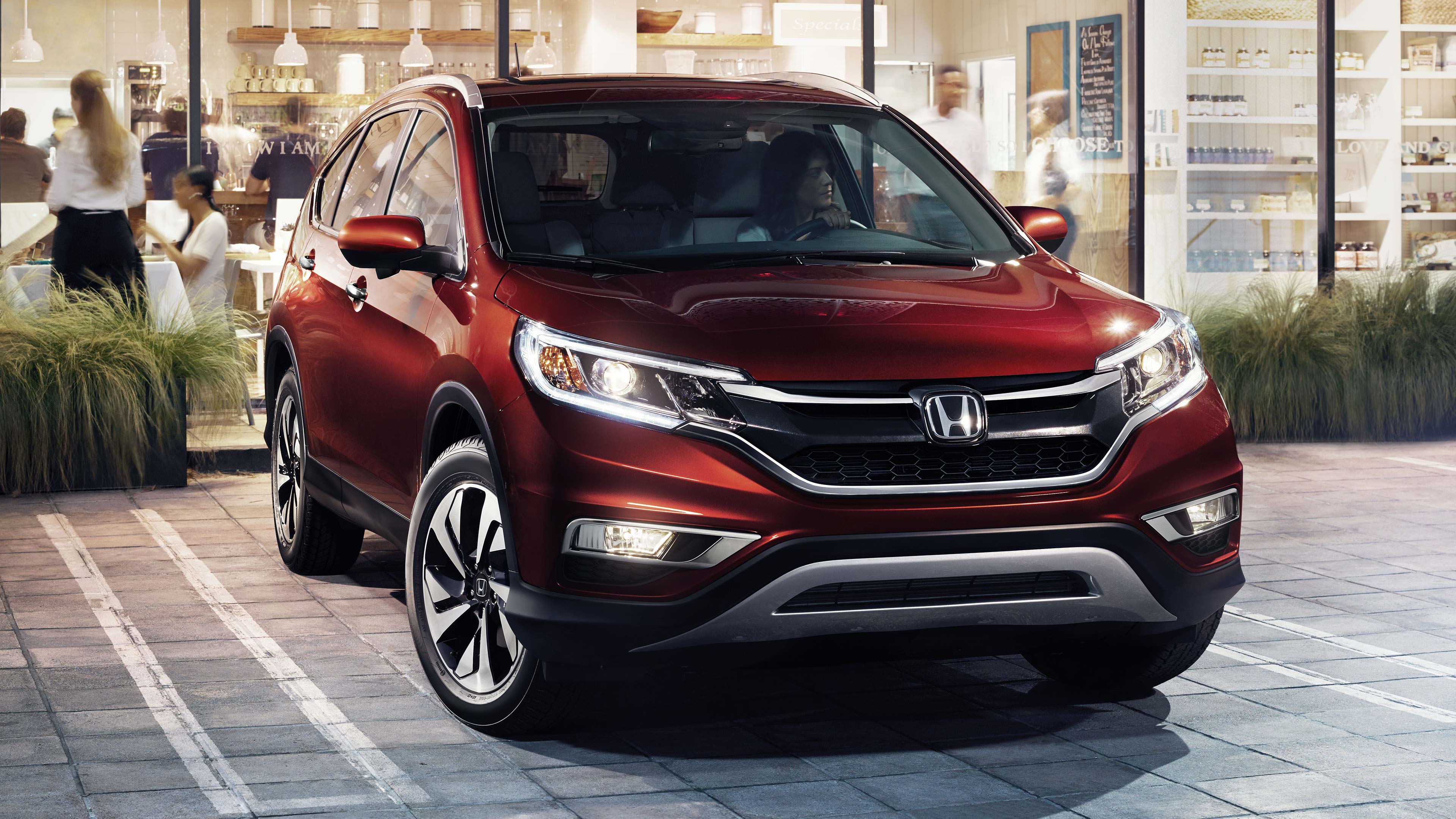 The CR-V has a very practical cabin, and rear passengers can enjoy an abundance of space along with the option to recline. The materials are sup-par, though–hard plastics surround you from all angles. And the user interface just isn’t that user-friendly compared to other models in the crossover class. You’ll get a lot of cargo space, though, at 37.2 cubic feet and a maximum of 70.9 cubic feet with the rear seating folded down.

The upscale interior of the Santa Fe stands out from other brands in its class. Higher-quality materials adorn the cabin, and the user controls are quite intuitive. You and your family will enjoy the spaciousness in the first two rows, and the third is perfect for the kids. You’ll also enjoy a wide range of recline angles, and your pet will enjoy more space in the cargo area too. You enjoy 41 feet of cargo space, but with the second row seating folded down, that doubles to 80 feet. Check it out for yourself during a test drive–feel free to bring the family and your pet!

So what’s the verdict? That’s up to you to decide. You’ll be getting much more power out of a 2017 Hyundai Santa Fe, so if you’re thinking about off-road adventures and doing some towing, then it’s the best option for you. The 2016 Honda CR-V struggles in these areas and sometimes even in the city because it sacrifices power for fuel efficiency. It’s a solid option, though, if your priority is fuel economy.

The Santa Fe and CR-V are two of the safest vehicles on the road, and we look forward to the IIHS confirming this officially. As for design, the CR-V has a great look to it, but so does the Santa Fe, and it offers a more upscale interior design and more cargo space.

Regardless of what you’re thinking, we encourage you to come on over to Kelowna Hyundai and take the 2017 Hyundai Santa Fe for a test drive!

The post The Hyundai Santa Fe vs. the Honda CR-V – A Faceoff appeared first on Kelowna Hyundai.

We want to help you find the perfect car that fits your budget. Please adjust the options below so we can estimate the most accurate monthly payments.

How much will you put down?